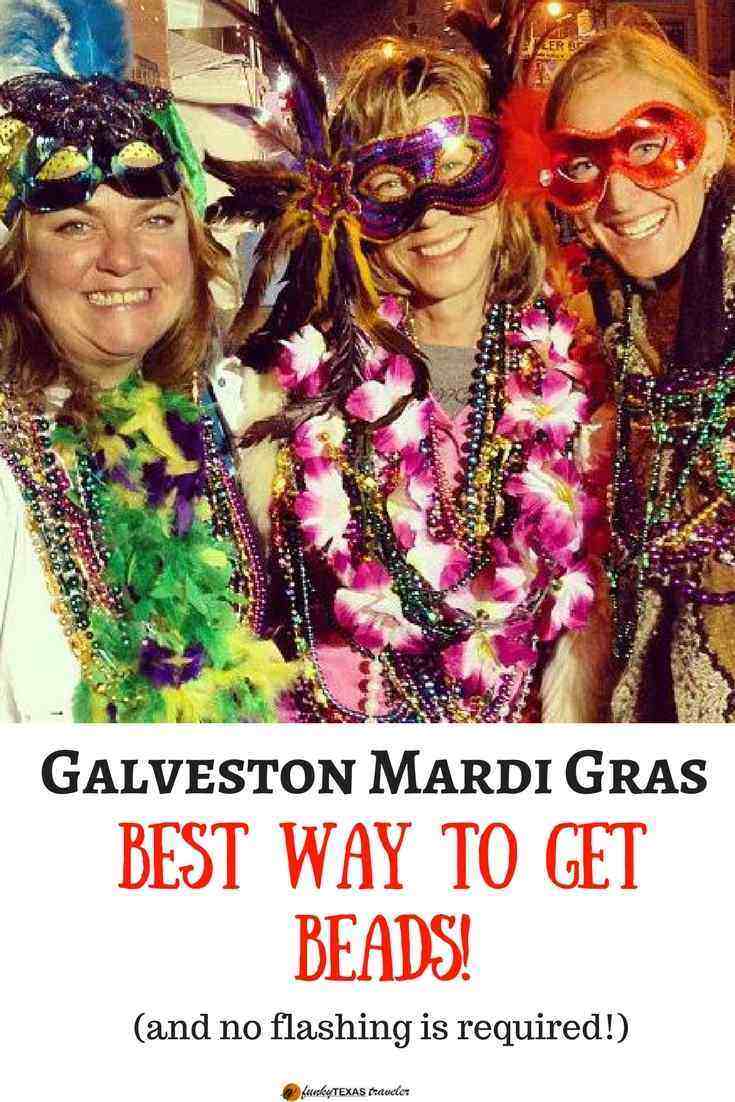 It’s Mardi Gras time!  Want to score lots of beads at this year’s Galveston Mardi Gras without catching any thrown from floats and too shy to flash anyone?  Don’t say impossible.  My friends and I  did it by creating an on-impulse  “tradition” and having the confidence to pull it off.  Check out our haul in pictures and then don’t be afraid to try it yourself!

A few years ago, these same friends thought it would be fun to arrive early at the Galveston Mardi Gras and get up close spots for the Krewe of Gambrinus Parade.  The Krewe parade covers a three-mile route starting at the Seawall and 57th street.

To hold onto our front row positions, the plan was apparently to lean against the cold barrier rail and wait until the parade got there.  To keep warm, we took turns running inside to Mo Betta’ market to get  plastic sippy cups of Chardonnay.

Waiting is not something I do well.  Like a three-year old, I get restless when I’m bored.  Even worse, some people were walking around, showing off the bounty of beads they had caught at earlier parades, festivals, and parties.  Now, not only was I bored, I was also beadless.  I felt like  the only girl at my high school homecoming without a giant,beribboned mum.

If you haven’t been to the Galveston  Mardi Gras, you should go.  Not as crazy and all consuming as the Mardi Gras in NOLA, the celebration still has a great pedigree.  Mardi Gras parades had been staged intermittently since shortly after the end Civil War until the early years of World War II.  In 1985, Galveston native, oilman and developer George Mitchell and his wife Cynthia revived the tradition with a one-mile parade to help celebrate the opening of the Tremont Hotel.  The Tremont was one of the first restorations in the Strand, Galveston’s now thriving Victorian business district.

Today there were over fifteen parades of different distances over the twelve days leading up to Fat Tuesday and a last blowout before the sacrifices of Lent.  And here we were on a Saturday evening around 6 o’clock, my four friends waiting patiently and me about to unleash the boredom monster.

Emboldened by the mask

Masked behind purple feathers and sequins, I started calling out to people walking by.  “Share your beads.”

“Hey, you have to earn your beads,” whispered my friend Rindy.  “You run along the parade route and beg the people on the floats to throw them to you.  Or, see those people up on the balconies?”  She pointed up to the people who had paid a premium to be above the us street people. ” They get lots of beads with those VIP passes.  If you pretend you’re going to flash them, they’ll throw some down.  That’s how you get beads.”

That sounded like too much work to me.  “Share yours beads.  It’s a Mardi Gras tradition,” I begged a group of drunken guys who obviously had plenty of beads to spare.  They looked confused.  They were supposed to be the ones asking for beads.  It didn’t  make sense buzzed brains – no parade, no boobs, no beads.

“Share your beads,” I keep propositioning anyone walking by.  A few people responded and walked over to us.  I inclined my head as if I were a princess at my coronation.  After each one ceremoniously draped beads over my head and around my neck, I realized my bead donors and the equally bored crowd around us were waiting to see what would happen next.

First I  solemnly air kissed my benefactors on both cheeks.  Then, making it all up in the moment, I held up my hands in their leopard-print and fur-trimmed gloves, mimicking the “touch-down Jesus” posture I remembered from church.  “Bless you, bless you.  In honor of Mardi Gras, I wish you many blessings,” I said.

“Share your beads,” I continued to call out.  More people started giving us beads, lots of beads and returned blessings and air kisses.  Pictures from that night show us each with many strands of beads.

One woman brought over a little girl around six or seven years old.  The woman told the little girl that this was a very special tradition, that she was going share her beads.  I squatted down low so she could put some of her beads on me.  After blessing her, I whispered in her ear that she was kind and giving and that her generosity was the true spirit of Mardi Gras.  She bounced away with mom, glancing back shyly.  Our masks made it easy for complete strangers to give and get beads and blessings.

The bands are dragging

Finally, after a couple of hours, we heard marching music and crowd cheers.  The parade was getting close and would end at the Railroad Museum, just a few blocks from where we were standing.  The people riding on the floats and in convertibles were having a great time.  The poor marching bands, on the other hand, were dragging and just wanted to get to the finish line.

As soon as we could read the name of each high school band on the banner that proceeded them,  we started cheering them on by name.  While everyone else was petitioning the floats for beads, our group was shouting “Yeah, Waltrip High!  Looking so good, You guys are the bomb!”   “Way to Go, Bellaire High!  Woo Woo!  ”We are high on Milby High!  Yeah Milby! ”   The bands perked up, stepped a little higher, and played a little louder.

We get a special performance

Then something amazing happened.  The parade flow backed up.  The high school band in front of us had to stop moving forward and march in place.  A half dozen band members of the drum section broke ranks and marched over to stand right in front of our area.  They were just over the rail from us.  The drummers were dancing, throwing their drum sticks up in the air, giving our section a show.  The crowd went wild.  Really wild.  Wild with the prospect that tonight was one of the last nights before forty days without chocolate, red meat,  sippy cups of wine or whatever you were going to deny yourself for Lent.  “Milby, Milby, Milby,” we screamed as the drummers rejoined their ranks and marched off.

Along came a few more floats including a spectacular, show-stopping one.   A man was walking in front of the float with a television camera operator following his movements.  Unexpectedly, he came and stood in the middle of our group and talked to the camera but not to us.  We realized we were being taped for a commercial, recap video or maybe even a news story from the Mardi Gras.

The crowd was still rambunctious with excitement from the drum show.  The man talking to the camera suddenly backed up and stood pressed up against the outside of the parade rail, leaning back to insert  himself among the five of us.  “It’s a great night at the Galveston Mardi Gras.  Come down and join the celebration,” he said,  or something to that effect.  Then the man and the camera operator walked off for a few yards, stopped and returned to do another take with us.

Now here is the funny thing.  During this whole time, the man did not say “Hi” or acknowledge that we were all standing shoulder to shoulder.  Turned out the only person who had not caught the Mardi Gras spirit was this guy – Tilman Fertitta, CNBC’s “Billion Dollar Buyer”, owner of Golden Nugget Hotels and Casinos, dozens of restaurant chains and resorts.   Fertitta was one of the men most singularly responsible to the resurgence of the party flavor of Galveston and cities from Lake Charles to Las Vegas.

Probably had a lot on his mind.

Giving our beads away

We started asking people to share their beads because we were bored.  We  got such a good response because people are looking for ways to connect and have  bigger part of any gathering.

Here’s why I think that.  After the parade, we left the Strand for a restaurant/club in the East End.   We gave away most of our beads to the other customers, making instant connections with more strangers.  Someone fired up the jukebox and  an impromptu dance party was in progress when we left.  All in all,  a great night.