Before Sutherland Springs became infamous for the killing of twenty-six people at a Baptist church service, that little town had a lot in common with the  128-year-old Bloys Cowboy Camp meeting we discovered outside Fort Davis.  Both towns once helped pioneer religion flourish with their giant outdoor gatherings.  Bloys Cowboy Campmeeting  is still practicing frontier faith in far West Texas  in a compound little changed in all these years.

Camp meetings were  a phenomenon of frontier Christianity.  The concept was  brought west by thousands of settlers of Scot-Irish roots.  These settlers were moving into new territories without towns or churches or ordained ministers.   Itinerant preachers filled the void, finding an open patch of ground for a pulpit.   Word would  then spread to isolated settlers who traveled miles and days to get a religious experience and some feeling of community.

A needed spiritual and physical break

The camp meeting’s non-stop preaching and singing paid off.  Whether people came because of sincere religious devotion or interest, or because they needed a break from the arduous routine; they often left as  new converts ready for the next meeting.

While  the sulfur springs made Sutherland Springs  an early tourist destination and a draw for big revivals and events,  towns around Bloys Cowboy Campmeeting like Fort Davis had no such appeal.  In West Texas, many residents still live in  as isolated a situation as in 1910, when a camp meeting in more centrally-located Sutherland Springs drew over 2500 people.

Floods and the completion of Highway 87 made Sutherland Springs almost a ghost town by 1940.   It’s now a rural suburb of San Antonio.  Permanent places of worship like the unlucky First Baptist Church sustain neighbors in good and bad times.  For Sutherland Springs,  camp meetings are a historical footnote.   Yet Bloys Cowboy campmeetings are alive and well into the 21rst century thanks to its remote location.

We found the site of the Bloys Cowboys campmeeting by accident.  With a few hours to kill after leaving the Davis Mountain State Park,  we turned onto the nearby scenic loop .  We were operating with no map and  only the highway signs to direct us.

When I did finally got hold of a map,  well after our drive, it had this warning: “The Scenic Loop is  75 miles of majestic scenery and wildlife.  It takes two hours to complete without stopping.  Be sure you have plenty of gas, water, and snacks.  Please respect the privacy of others by staying on the pavement – Thank you.”

The scenic loop delivered on the promised majestic scenery and endless driving.  After an hour, we began to appreciate the  isolation that these spread out homesteads lived with daily.   I am glad we took the loop but I found myself longing to pass another car or see a mailbox, any kind of indication of human life. 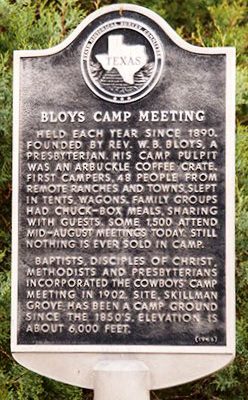 Towards the end of the drive, we passed a forbidding and austere compound  in an area of the Davis Mountains called Skillman Grove.  It was easy to think Branch Davidians or a lawless polygamist sect in this solitary setting.  A metal sign read “Bloys Campmeeting”.  The place looked completely deserted and yet impecably well maintained.

Once I got an internet connection on the Amtrak back to Houston,  I looked up Bloys  Cowboy Campmeeting.  There I learned about William B. Bloys in  Texas Escapes  and the Texas State Historical Association Handbook.  Each source had a lengthy write-up on Bloys.  One went  on to say that  while Roy Bean is much more colorful and widely known,  Bloys  was far more influential in frontier days and up to the present.

W. B. Bloys was a  Presbyterian home missionary serving in Fort Davis. Because the ranches of the region have always been widely separated,  it was impossible for frontier families to worship with neighbors and friends.  Setting aside modern doctrinal divisions, Bloys made  saving  the entire flock of the area  his primary responsibility.

No matter what their denomination, Bloys rode and ministered to many of the outlying ranches situated in the same mountainous area we’d driven through recently.   It had taken hours in a car.   What must it be like on a horse?

In 1890,  Bloys made a plan to bring local families together annually for religious services. He organized an old-style camp meeting and 48 people from remote towns and ranches rode in and  slept in tents and wagons.

Those first campers  met under a brush arbor and then in a canvas tent. In 1912,  a permanent tabernacle was built for services.  Eventually the camp expanded into six areas with eating sheds where families gathered.  Cooking is still ranch-style on open fires. Wooden, stone and metal buildings dot the one-square mile area which butts up to the  Davis Mountain foothills.  It was those structures that first caught my attention.

Today over 2,500 people regularly make the annual pilgrimage to Skillmans Grove from the  first Tuesday through Sunday of August.  Nothing is sold.   Money for lodging and food is donated with friends sharing cooking and maintenance duties.  August 2016 was the 128th camp meeting.

Many who come are fourth and fifth generation descendants of the original attendees, making their 60th or 70th visit to the gathering.  Still, modern times have intruded a little into this cherished piece of the past.I checked Bloyscampmeeting.org (yes, they have a website) and read a letter admonishing campers for a few transgressions that William B. Bloys could never have imagined:

I think I know what boulder rolling is but it’s interesting that the problem is significant enough to warrant a rule.

So the Bloys Cowboy Campmeeting of the Davis Mountains continues because the population density and proximity never made it obsolete.  In contrast,  small towns like Sutherland Springs moved into permanent churches which also continued to be the mainstay of their communities.  But the same strong faith is helping both congregations survive the worst that the past or present era throws at them.

Finding Bloys Cowboy Campmeeting site was a happy accident.  What accidental discoveries do you have to share?  I’m always looking for a reason to wander!