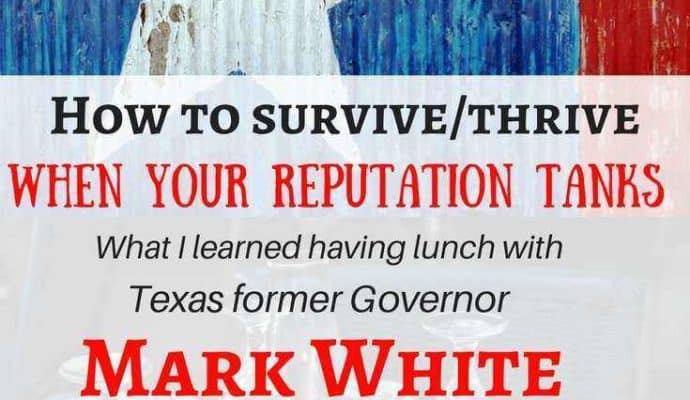 Last spring, I had lunch with Mark White, the former governor of Texas.  I wasn’t attending some huge conference where he was the speaker.  It was just Mark and me and Joe Holley, a friend who worked with the Houston Chronicle and got us all together at Mark’s favorite restaurant, The Reef.  I got there a little early, so I went to the restroom to check for fashion disasters.  Usually scattered and in a rush leaving the house, I’ve been known to put my shirt on inside out or miss a button.

When I got back to the hostess stand, Mark was waiting by himself.  “Well, this is awkward,” I thought.   “Mark?” I asked.  “Linda?” he responded.  “I looks like Joe is late as usual,” I said, shaking his hand.   ‘Let’s grab a table and stick him with the bill,” Mark said, and any awkwardness disappeared.

We were early for the lunch crowd but heading to the back table, he was stopped by at least two people he knew.  Once we sat down,  another man came by to introduce himself.  Mark was enthusiastic and gracious, even drawing me into the conversation.  This tall former state leader with the reddened face and the prominent nose was definitely admired.

An friendly squabble breaks the ice

When Joe joined us fifteen minutes later, Mark and I were arguing.  I’m a tap water drinker, but Mark wouldn’t hear of that.  “Bring her something fizzy,” Mark told the waiter.  The waiter brought me a San Pellegrino and began to pour it into my water glass.  “Don’t make her drink that stuff out of that glass.  Bring her one of those goblets or wine glasses.”  The waiter was smiling.  On later telling, some female friends thought Mark was bossy.   Hard to explain but to me, it felt like sparing between two old friends wanting the other to get the most enjoyment out of an outing.

Blame it on the San Jacinto Monument

I’d been after Joe to set up this lunch.  A few years ago, I’d read Joe’s column about Mark White and his work to preserve the San Jacinto Battleground State Historic Site.   Within a month of reading the column, I was looking at the engravings on the base of the San Jac monument, the tallest stone column memorial structure in the world.

It was a mild weekday morning,  a quiet time to wander and realize how unlikely Texas’ independence seemed at the time of this battle…  I watched the movie, looked at the artifacts and rode the elevator up with a grandmother and her excited grandson, a boy about five.

That story on San Jacinto was also how I meet Joe.  Mark White’s efforts to help Texan’s understand our courageous and stumbling path to statehood resonated with me.   I emailed Joe to see if he could grab a coffee and meet.  The Native Texan columnist became a friend and a bit of a mentor as I revived this blog.  Two years later,  I was eating  Gulf Coast seafood with Texas’ former attorney general and one-term governor.

Learn from your history – good and bad

I knew from the San Jac story that Mark White and I shared a common belief.  Everyone should understand how circumstances molded them,  their state and their country.  Then you had to acknowledge and accept what you learn –  warts and all.

Mark had accepted and embraced his personal history which was on full display at lunch.  He was a conservative Democrat who poked fun at himself for being a member of a Shiite Baptist church.

Mark was Texas to the roots of his teeth – loud with sweeping hand movements and lots country-isms.  A Baylor grad, discussing the current sex scandals in Waco and the reaction of the university board got him going.  “If you mess up, you ‘fess up,” he repeated emphatically, many months before #MeToo made Mark White sound prescient.

The right thing is rarely popular

Here was an aging, opinionated public servant who believed fervently in doing the right thing.   Even if the right thing was so unpopular that it going to cost you personally.  Like, get you kicked out of a  job you’d fought for and loved dearly.

That was the case when Mark took on fashioning  Texas of the future.  That reboot would take a  focus on transportation, diversifying the economy beyond oil and yanking the state up from its last-place ranking in education.

Mark White sealed his political fate when he f*&*%ed with high school football.  “No Pass/No Play” was just part of 1985’s House Bill 72 which also dealt with teacher pay, class size, testing, finance and teacher competency.  All important issues surely,  yet “No Pass No Play” got White replaced after his first term with a  Republican governor.

The sting of that slap seemed to have worn off, and White was proud of his sacrifice.  He was also proud of his ability to change his mind.  Even on seemingly black and white topics like the death penalty.

Change your mind when you find out you’re wrong

“People who knew me as governor and attorney general can’t believe I now question it, “  he told us.

He praised an aide who made him pour over each appeal.  The way the death penalty was applied was capricious.  That discovery seemed to sicken him, even many years later.  His feelings about the death penalty are now more nuanced, as he wrote in Politico.

But the main topic at our lunch together kept circling back to another former Texas governor, Sam Houston.  We were both enamored to the point of being evangelical about our hometown’s deeply flawed and eccentric namesake.  We wanted people to appreciate the very human Sam Houston and not the sanitized legend.  Like fanboys and fangirls, we ticked off our favorite Ole Sam oddities.

Houston’s own reputation rose and fell like a piston, something Mark White had experienced.  A little about the illustrious hero of San Jacinto.

Houston ran away from home to live with the Cherokees rather that work as a clerk in his brother’s shop.  Later, back in Tennessee and in politics, he was well connected with Andrew Jackson and became governor of Tennessee at age 34.  Yet two years later, Houston resigned as governor and hightailed it to Arkansas Territory.

When he got into a fight with a US congressman, Sam fled to Texas, then a Mexican state.  Life in  Texas was as bumpy as the one he left behind in Tennessee.

As Mexican troops advanced, detractors were calling him a coward for refusing to send aid to the Alamo defenders.  Sam knew there was no military advantage to holding the Alamo, but he was already fighting the stubbornness for which we Texans would become famous.

Houston was running from Santa Anna when he saw a chance to make a stand at San Jacinto.  He defeated the Mexican forces in an 18-minute battle.  With his reputation soaring,  Houston first became president of the Republic of Texas and later governor of the State of Texas.

Like Governor Mark White, Sam Houston as governor had a hard time just going along when something stuck in his craw as not right.  Houston was removed from office when he refused to secede and swear allegiance to the Confederacy.

He lived and died in ignominy in Huntsville, where his home is now a museum.  Go there.  Go by yourself.  Read the plaques.  Chances are you will fall in love with our eccentric founder,  just the way Mark White and I did.

We had talked, argued and laughed for almost two hours.  The lunch plates disappeared.  We got up and headed back to our individual lives.  A few more people flagged Mark down on our way out the door.  We talked about meeting again at one of my favorite lunch locations, Bellaire Broiler Burger.  It would be fun seeing him try to order “fizzy water” there.

Just months later, on  August 5, 2017, Joe texted me.  “Our friend Mark White just died.”  I was sitting in front of a convenience store on NASA Road 1, grabbing beer and ice for a boat trip.

Like any random bad news, you can’t quite process it a few seconds.  How had that rowdy, raucous, iconic spirit been so quickly quieted?  Our long lunch a few months earlier would have no encore.

No picture but lasting lessons

I’m sorry and, at the same time, not sorry I didn’t take a selfie with Mark White.  He would have been flattered.  But I think the Indigo Girls got it right –  “Don’t take a picture.  Remember this in your heart.”

Mark White learned and lived by surviving and thriving when his reputation tanked, at least for a few years.  It seemed to boil down to taking comfort that you did right things with the knowledge you had at that moment.

And if later, someone gave you a different perspective that made you question your actions, being brave enough to change your mind.  Sam Houston taught us well.   We just have to remember his lessons.  Mark White did.

Who inspires you to do the right thing?

We never stop learning.  Share who inspires you – from history or contemporary times, fact or fiction.  Love to hear from you.