Recently, a man got lost at Buc-ee’s in Katy, Texas.  He was so lost that his family contemplated putting out a silver alert.  If someone told me this story, I would have sworn it was an urban legend. Except I was there.  Now I know how weird family stories get started.

How the man got lost at Buc-ee’s

I bet you’re thinking:  “How irresponsible to let an easily confused oldster roam without supervision.”

First, this man is a grown-ass adult Texan.  His name is David, and he was the best man at our wedding.  He’d also been on a memorable campout on the Guadalupe many, many years ago. David had flown in the evening before from Cairo, Egypt, and spent the night with us in Houston.

Second, this guy is a world traveler who has been in the oil “bidness” for decades.  Along with his place in Cairo, he has homes in India, Uruguay, Brazil, and Austin.   And he seems to get around the planet just fine. But he met his match on the Katy prairie.

A question of logistics

David keeps a car in Smithville with his younger brother Marc.  My husband called Marc to discuss the best way to get David to his car and on to Austin.  They came up with two options.

The second option had me driving David and his ex-Marine son and luggage to Katy.  Marc would drive David’s car to this rendezvous and David would drop Marc off in Smithville on his way to Austin.  This plan was simple and would save Marc hours dealing with Houston traffic.

We’d meet at Buc-ee’s in Katy.  We figured it was hard to miss the towering buck-toothed beaver sign from either direction.  This plan looked so good on paper.  But it had a fatal flaw.  We were Texans dealing with Texans.  That’s like trying to lasso a cauldron of bats.

I pulled into the Buc-ee’s in Katy at straight up 10:00 a.m.  David, his son and I grabbed some Hippo tacos and called Marc.  David’s brother was still fifteen minutes shy of our location, so we started exploring this new Buc-ee’s.

I’ve been a Buc-ee’s fan since the company put up a billboard on I-10 westbound near the Louisiana state line.  It had a sales message that woman tuned into on a higher frequency.  Buc-ee’s boasted about clean bathrooms.  And if it was “ only” 248 miles away in Luling, Buc-ee’s mimicked every mother’s refrain.  “You can hold it,” the billboard said.

Texans love bathroom humor,  so it’s not surprising that Buc-ee’s caught on and followed up with slogans like: “The Top Two Reasons to Stop at Buc-ee’s: #1 and #2” and “Clean Restrooms, We Guaranpee It”  The shock was how incredibly successful they became based on that promise.

Buc-ee’s is built in the image of Texas

There are now thirty-three locations.  Some locations have over eighty toilets and over one hundred gas pumps. Plus ready-made and packaged food, home décor, a bakery, a sporting goods section.  Houston Chronicle’s Craig Hlavaty summed it up best:   “It seems that Buc-ee’s is a perfect mirror image of Texas itself. Big, brash, and full of gas, barbecue, candy, and kolaches.

But our international Texan friend had not been in a Buc-ee’s in a long time.  The size of the Katy location (50,000 square feet) and the various departments (the world’s largest carwash) and sheer volume of stuff to buy probably disoriented him.

He was a victim of Buc-ee’s brain

“Walking into Buc-ee’s was like wandering into a mix of a Walmart, a barbecue-centric deli, and the Texas tourism bureau, plus a dash of the Cracker Barrel general store,” says Business Insider.

Psychologically, you can’t go into a Buc-ee’s to only use the bathroom or get gas.  There must be something in the air that makes you think you must have a souvenir of every Buc-ee’s visit.  Like the sign David bought me.  I could have lived without it… but I wouldn’t have been happy

And then this man got lost at Buc-ee’s

Around about the time that we were deciding on the sign, Marc, and his daughter and their beagle Molly showed up.  More Hippo tacos were bought and consumed.  We hugged all around.  Brothers “titty-twisted” each other in the aisles.  Life was simple.

And then it happened.  Marc gave David the keys to the car to fill the tank.  The rest of us stayed cool inside Buc-cee’s entry area.  It was a good ten minutes before we realized we were missing David.

Once outside, Marc’s daughter Nicki saw David pull into a distant parking space.  My car was around the east side of the building with the luggage that needed transferring.

Between the time that David was last sighted, and I returned with my car to offload the luggage, he had disappeared.

The man was phone-less, sort of

It got worse.  David had not yet activated a US phone.  He was carrying the Egyptian one that uses Whats App and lots of other ways to call internationally. None of us knew that number.  And even if we had, all of us were now IN THE UNITED STATES!  We had no way to contact him and find out where he was.

The search is on

The rest of his family got into my Subaru so that we would have more eyes on deck.  That’s a funny pun because Marc is a sea captain who regularly relocates ocean rigs from one spot on the globe to another.

It did feel like we were searching amidst an endless sea of cars and pickup trucks.  We circled the Buc-ee’s at least four times with no sighting.  Finally, someone suggested going inside and asking a cashier to make an announcement.

Is it time for a silver alert?

Which lead to our in-car discussion of a silver alert. When we all get to that age and/or mental capacity, will it be a badge of honor or of shame to be the subject of a Silver Alert?

I think about that very question whenever I hear Fastball’s “The Way” and remember the story behind the song.  But I have strayed…. as David had done.

Finally, we find the man who got lost at Buc-ee’s

Another trip or two around Buc-ee’s and swing by the world’s largest carwash was unproductive.  We were all debating whether to head to the nearby Igloo Cooler factory store to see if David had mistaken that for part of Buc-ee’s.  That’s when we spotted him.

Or rather, Marc’s daughter Nicki spotted his BMW backing into a parking spot close to where I had initially parked.   My husband, ever a Boy Scout,  reminded me that when you are lost in the woods, you should stay put.  I reminded him that we weren’t in the woods, we were at a Buc-ee’s convenience store.

Was he trying to hide?

We were laughing and cussing so hard; we had to wipe the tears using a  roll of toilet paper from the glove compartment.

Marc, thoroughly pissed at another of David’s time-wasting antics, told David that only people who have something to hide back into a parking space.

How family legends get started 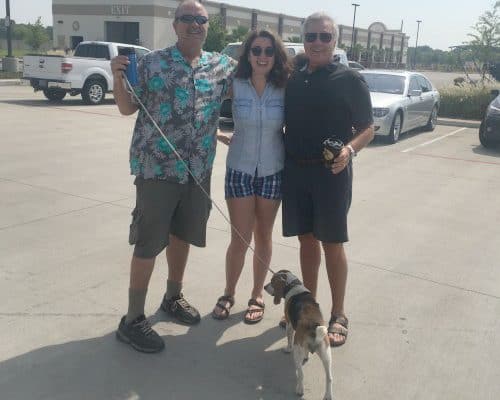 Finally,  we swapped out all the luggage, gave out more hugs and the brothers, their adult kids and Molly the beagle took off for Smithville/ Austin.  About 45 minutes and one bizarre adventure after they had expected to head home

And that, boys and girls, is how a legendary but weird family story is born.

What are your favorite family stories?

Please share.  I love hearing from you.  And I love sharing discoveries,  like some of the cool stuff I found at the Igloo Cooler Factory Store.