As with all things, there is controversy on who this beloved saga is about and where it took place.  The markers at the Evangeline Oak in St. Martinsville tend to favor a encounter between the American poet,  Henry Wadsworth Longfellow and someone from the Louisiana Acadiana area who passed on the bones of the story.  Either way, Longfellow had memorialized the expulsion of the Acadians in his poem, “Evangeline.”  Fictional Evangeline’s undying love and torturous separation from her fiance, Gabriel continues to color historic accounts of the deportation.  The poem ends with Evangeline and Gabriel in Philadelphia, reunited just long enough for Gabriel to die in her arms. 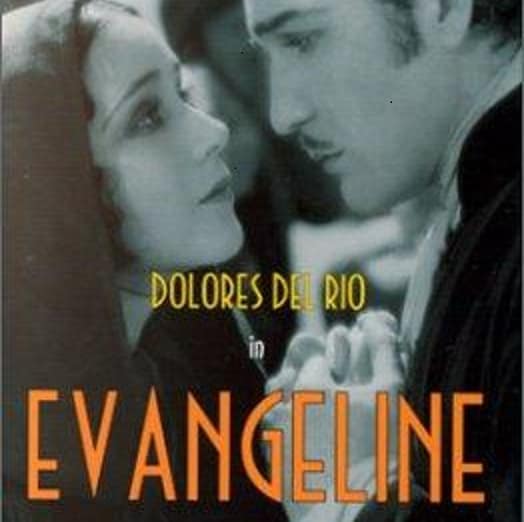 Felix Voorhies in Acadian Reminiscences : The True Story of Evangeline proposed that the poem was actually based on Emmeline LaBiche and Louis Arceneaux, who reunited under the Evangeline Oak on the Bayou Teche.  Emmeline’s grave in the St. Martin de Tours square and Evangeline Oak are as revered as the relics of saints on the altar of that nearby church. Evangeline was commemorated in the naming of Louisiana’s first state park and the first oil well.  There was a DVD of the 1929 Delores del Rio movie in the Old Castillo’s parlor, and Delores reportedly posed for the statue in front of the church.

St. Martinville was the site of the original landing of the Acadians fleeing the present day Canadian provinces of Nova Scotia, New Brunswick, Prince Edward Island.  This mass exodus resulted from British victory in  the French and Indian War.  A treaty signed in 1713 let the Acadians to keep their lands but some Acadians continued to pester the British by refusing to sign an unconditional oath of allegiance and aiding the French.  Without making distinctions between the Acadians who had been neutral and those who had misbehaved, the bothered Brits finally ordered the Acadian Expulsion (1755–1764) .

Many moved to the region of the Atakapa in present-day Louisiana after following circuitous routes through France, other French holdings and British colonies along the east coast of what is now the United States.  Led by Joseph Broussard, the first group of 200 Acadians arrived 1765 on the banks of the Bayou Teche.  Bayou Teche was the Mississippi River’s main course when it developed a delta about 2,800 to 4,500 years ago.  During the Acadian migration, the Teche was still a primary means of transportation.  Broussard became militia captain and commander of the “Acadians of the Atakapas” region in St. Martinville in Spanish Louisiana, France having transferred Louisiana to Spain a few years before the Acadians arrived.


France and Spain were having a bit of a bromance at the time, in part due to their common Catholic religion.  Under interim Spanish governor of Louisiana, Bernardo de Gálvez, the Acadians could continue to speak their language, follow Catholicism and settle in with minimal fuss. In an ironic twist, during the American Revolution just a few years later, the Acadians helped Galvez and his Spanish Regulars boot the British out of Fort Bute and Baton Rouge, thereby ending up on the winning side of that conflict.

The Acadians did not take over some uninhabited hinterland.  The titular Atakapas and Chitimacha Native American tribes had made a home in the swamps, bayous and prairie and were already sharing them with  Spanish Basques and Spanish Canary Islanders.  While Acadians eventually formed the largest ethnic group in Louisiana, they combined their French-Canadian bloodlines with the natives and earlier settlers plus those of African American slaves and freemen, Mexicans, Cubans and even some early Filipino migrants known as Manilamen.

The Acadian language and culture remained prominent and was strengthened by the influences of the people surrounding them,  strong enough to withstand the attempted suppression of  what was now called the  Cajun language and lifestyle in the enlightened 20th century.  “Cajun,” a corruption of the word “Acadian,” became a derogatory label.  After decades of Americanization, Louisiana Governor Edwards’ proud self -identification as an Acadian descendant changed the conversation.  Cajuns also earned recognition in WW2 by acting as interpreters for American forces in France, using the skill that would have earned those same Cajuns a beating in elementary school.

Surprisingly, one of the first giant crawfish events in Houston happened in the mid 1980’s in the middle of Houston’s museum district.  What began as a desire to shore up a seemingly weak line-up for the annual Miller Outdoor Theater KIKK Country Concert showed the incredible appetite that Houstonians have for mud bugs.

Texans had been traveling for years to Breaux Bridge, Louisiana,   home of the biennial Crawfish Festival.  I knew about the festival from friends who told stories of a festival so big and so much fun that the town needed two years between each one to recover.


I joined KIKK about a year after Aaron Latham had written the Esquire Magazine piece that would become the basis for the 1980 movie, Urban Cowboy.  KIKK’s twice a year concerts at Miller Theater rode the country popularity wave for over 14 years, bringing in “new” hat acts like George Strait, Alan Jackson and Clint Black and legends like Buck Owens, George Jones and Jon Conlee.

We needed more than music

The line-up for 1985 was not coming together.  With country music’s on-going popularity, it was getting harder to get the acts we wanted. Brenda Lee was signed as our legend, a newcomer named Jo-El Sonnier represented the emerging performer category and we had an unclassifiable act named Rockin’ Sidney, who was about to release a zydeco song called “My Toot Toot”.  Joe Ladd, KIKK’s star picker had never failed to deliver a line-up that mirrored the top of the charts by the time the show came along.  I just did not see how he could pull that off with this year’s bill.  Since Jo-el Sonnier and Rockin’ Sydney had a Cajun following, KIKK’s promo director, Joan Hayes and I headed to Louisiana  to see if we could steal some lightning from the Breaux Bridge Crawfish Fest.