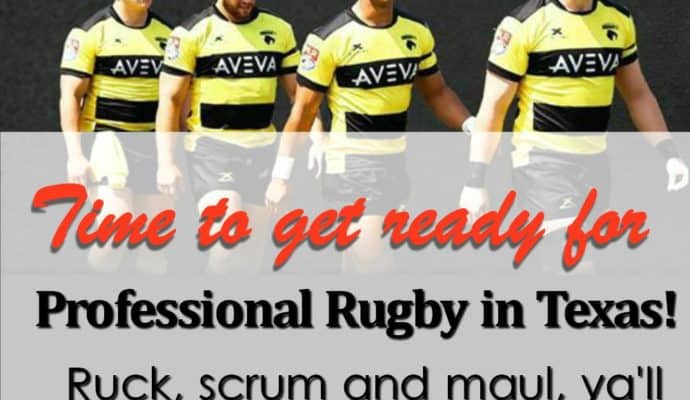 Want more proof that we live in one of the most diverse states in the US?  Professional rugby in Texas, in the very shapely form of  founding Major League Rugby’s Houston SaberCats,  broke ground on a brand new stadium.  Already I’m hoping for a ladies’ night promotion, pitting the Houston firefighters featured in the calendar against these SaberCat players.

I know nothing about rugby except the action looks a bit like football.  Also the players dress in form-fitting shorts and don’t wear pads and helmets.  And rugby players go almost non-stop for 80 minutes. My biggest complaint with American Football has always been boredom.   I could have knitted a scarf during all the no-play time.

Football has many meanings

Even the word “football” is getting more confusing with the advent of professional rugby in Texas.  According to Wikipedia:  “Football is a family of team sports that involve kicking a ball with a foot to score a goal.  The word “football” is understood to refer to whichever form of football is the most popular in the regional context in which the word appears.”

That means, what we call soccer and rugby is more likely to be called “football” by rest of the planet. But all that can change now that there is professional rugby in Texas.  As any Texan knows, we have a talent for corrupting a pronunciation so badly, that over time, even its mother country won’t know it.  Right, Refugio?

Breaking ground for a brand new professional sports stadium is big news, especially since it is going to be located off State Highway 288.   It’s just a few miles north and a little over “passing” distance from Pearland, but only if the player passing is standing backwards.  You see, in rugby, a pass must not travel forwards.  So much to learn!

AVEVA is the title sponsor of the new stadium which is located at the Houston Sports Park.  AVEVA is a global leader in engineering and industrial software and has British roots.  That makes it a logical partner for the Houston SaberCats whose players hail from Texas, UK, Australian, Scotland, Ireland, Guam, Fiji, even California.

And the fans promise to be interesting too.  Cody Glover, a middle-school wood-shop teacher, bought a yellow and black kilt for the SaberCat’s ground breaking.  He’s adding it to the 3-4 other kilts he already  has.

Cody now lives in Spring but he spent a summer in Ireland as a teen.  He learned to love rugby because the action never stops.

A game that will live in infamy

To bolster his statement, Cody told me about Wayne ‘Buck’ Shelford, a New Zealand rugby legend.  In 1986, in one of the most aggressive games ever, Shelford lost four teeth and ripped his scrotum, leaving him with one testicle hanging free.   But did play stop?  Nooooo.  Shelford played on until sidelined by a concussion.  Now that’s a game!

Cody also offered this advice for enjoying professional ruby in Texas: “Remember, while soccer is a gentlemen’s game played by hooligans, rugby is a hooligans’ game played by gentlemen.”  Getting your privates torn off sounds rowdy for either persuasion.

The Houston SaberCats played their first MLR season at Constellation Field in Sugar Land.  For their 2018 season, they used Dyer Stadium.   They hope to move into their permanent home at AVEVA Stadium by January 2019.

Making a home for professional rugby in Texas

While dignitaries like Houston Mayor Sylvester Turner and Craig Hayman, AVEVA’s Chief Executive, dug in with bright yellow shovels at stadium ground breaking,  construction supervisor Frank Runnels waited patiently to get back on the job.  He has a stadium to build and he knows how precious every good weather day is to a project.

While his monster machines where grading the dirt off-camera, he was planning for all the underground and foundation work to come.  And desperately hoping no hooligan like Hurricane Harvey intervenes.

Another team now carries the ball

Watching Frank waiting for TV cameras to finish taping, I decided I wanted his picture with some of the rugby players.  After all, once everyone left the construction site, it would Frank’s team at Christensen Building Group who would have to get this stadium up and running.

Hopefully, for that exhibition game between the calendar fire fighters and the Houston SaberCats – hint, hint.

What should I know about rugby

I’m looking forward to my first fast rugby game.  What do you yell?  How do you dress?  Is there any game etiquette I need to know about? I love hearing from you.