“I travel to find obstacles, to discover my limits, to ease the passage of time, to reassure myself that innocence and antiquity exist, to search for links to the past.”  – 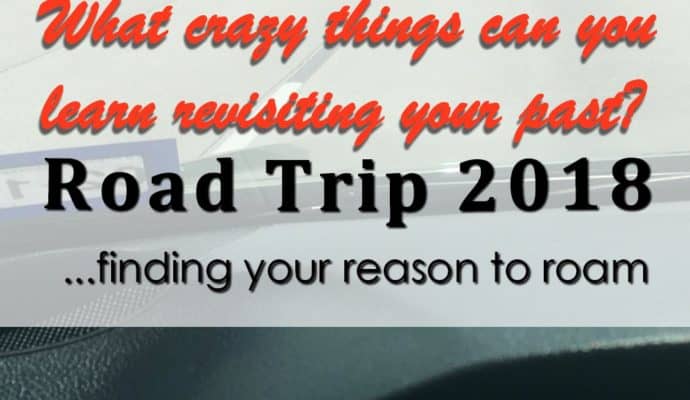 Ever thought how much you can learn when you revisit your past?  Road Trips 2018 is all about connecting with my deep southern roots – back both 58 and 500 years ago.  But first I’ve got to cross 3 1/2 states to get there!

Here’s what got me started.  A cousin contacted  me on Linkedin a couple of years ago.  We share paternal grandparents.  She got me interested in our grandfather’s genealogical line.  This road trip was originally planned with her.

But her job quashed those plans, so I am traveling on my own to the Big Bend and Mud Flats area of Florida and the little town of Perry.  I’m staying with my father’s younger cousin.  My father and his cousin were very close.

My father’s cousin is majorly into genealogy, too. He’s been running down my grandmother’s line.  How cool!   But I’m hoping  I’ll get exposed to a lot more than ancient ancestors.   I’m going to get to know my late father from people who knew and loved him from his earliest years.

Knowing time is right to revisit your past – Road Trip 2018

So many signs are pointing me to the open road.  I went to the library to get a book for this trip and found a new Paul Theroux work.  He is my favorite author and has taken me all around the world.

Anthony Bourdain killed himself  recently.  I’m surprised I’m so heartbroken over that but Bourdain was a rare truth-teller.   After twenty years behind a stove, he took a chance and sent in an article to New York Times,  exposing the dark and funny side of the restaurant business.

Bourdain discovered he had a talent, or maybe a compulsion, to travel and tell us about what he experienced in a no-bullshit way.  As of this writing, we still don’t know why he hung himself.

A sign from God on the way out of town

Leaving Houston on the 610 South Loop, I got behind a Toyota Matrix that was creeping along at 45 mph.  I couldn’t go around her because the Toyota and I were being passed on both sides by dozens of  Corvettes, Mustangs and other muscle cars.

They must have been a club out for a Sunday morning road rally.  Cars whizzed by the Toyota and me like a school of fish maneuvering around a rock.  After tensing for a moment, I sensed God must have placed the Matrix in my way to slow me down.  “Take time and see what I have to show you,” I  heard.

Do you remember Stuckey’s?

Outside of Beaumont, I passed an old Stuckey’s.   That chain of diners are completely interwoven in my childhood psyche with my family’s frequent traipses back and forth across the country.  Read about about one of those trips here.  See if it rings any bells.

Just  a half mile further, I passed a brand-new Stuckey’s on the opposite side of 1-10 east.  It looked like a faux Buc-ees.  While the new new version saddened me,  I was glad the company has let the older Stuckey’s live out its years in dignity instead of plowing it down for the new version.  That’s a courtesy you don’t often see

Just leaving Texas is a trip

When you head east, Texas can feel like a normal-sized state.  However, just to keep you aware that Texas is closer in size to a country (twice as large as some like Germany), the Texas Department of Transportation  has a reminder.  It’s a sign facing westbound traffic that gives the distance to our western border.

The sign tells you that it will take you over twelve hours and 847 miles to drive from Orange, Texas to our western border at El Paso.  This will put it all in perspective.  That is one hour more that it takes you to drive from El Paso to Orange, California!

One hour and 50 minutes after I left Houston, I hit the Louisiana state line.   The Louisiana Welcome Center at this border is one of the prettiest I’ve seen.   I planned to stop there but sadly it was under construction.  Not surprising since this idyllic spot has been in the path of several recent hurricanes.  I guess the next super storm will have a shiny new target.

Only 562 more miles and three more states to go

1. I’ve got a bigger bladder than I thought

After a bathroom break at the Borderline Casino and Travel center instead of the Louisiana Welcome Center, I made my only other stop for a Subway Sandwich and more fuel in Long Beach Mississippi.  Pretty impressive, huh?  Two breaks in 600 miles.

2. I-10 East is claustrophobic

While I-10 East is pretty monotonous for big stretches, the landscape is close, green and lush in this direction. Swamps, pines and wetlands, broken up by exceedingly long bridges stretched over miles of water –  Lake Pontchartrain, Mobile Bay and Escambia Bay.

3. Be open to what wrong turns reveal.

My goal was to make Marianna by the first night.  That put me only two hours from my final destination in Perry, Florida.

I took the wrong exit off 1-10 to get to Marianna. That sent me through the darkening back roads of this historic town and  past what looked like an old boarded up prison.  The structure was spooky in the moments just before night fell.

When I got to my hotel, I asked the desk clerk about the old prison.  Turned out it was an abandoned boys home.  Must have been some pretty rambunctious boys judging from the razor wire atop the chain link fences.

The desk clerk said it was supposed to be haunted because the legend was that several boys had disappeared from there. I don’t doubt that.   NPR did a story on it in 2012.  The piece was  called Florida’s Dozier School for Boys – A True Horror Story

The first most horrifying revelation was that the Dozier School for Boys remained in operation until 2011.

The second was that, once I passed the reformatory, I drove into a very picturesque and gentile Marianna.  How did these two worlds co-exist, almost touching to each other?  God’s message delivered by the muscle car parade was correct.  “Sit back and learn from what I have to show you.”

On another note, many of my friends think I am brave for my love of solo road-tripping.  But if you’d seen me that night in  Marianna, you’d know my dirty secret.  I’m a chicken-shit!

Because I was stopping just after dark on a Sunday night, my hotel looked almost empty.  I was sure I was the only one in my wing, which was set across a sprawling yard from the office and snuggling up against dark pines.

The room had a huge picture window.  I placed the ironing board, luggage rack and chair in front of the window so I would hear if anyone tried to break in.  And I regretted not bringing in the windshield hammer that my husband keeps in my car.

Not so courageous now, huh?  As my daughter loves to say – everyone is brave until they find out those big cockroaches can fly!

Tomorrow, I reach Perry before noon.  Tonight, I say a prayer of thanks that I’ve had traveling mercies today.  And another prayer for those long lost boys.   Night, night.

Tell me about your favorite road trip memories

I love to hear from you.