“Going to the woods is going home, for I suppose we came from the woods originally.”
John Muir – Father of our national parks 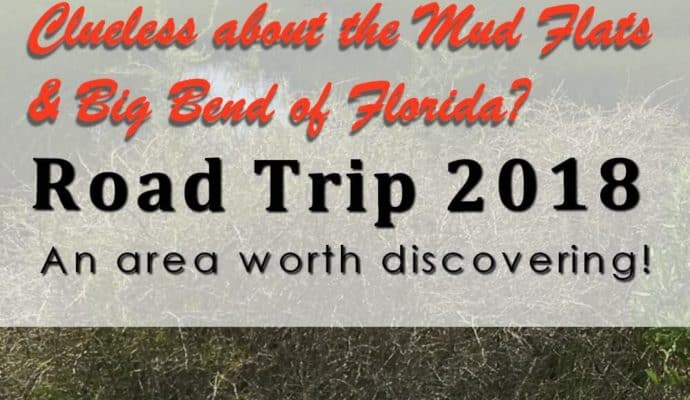 No matter how far you grow up from the places your parents were  raised, those unfamiliar places still form part of  who you are.  The mud flats and big bend of Florida are in my DNA, courtesy of my dad.  Time to find out what blame or praise they get for the person I have become.

If, like me, you were raised in a nomadic family, you know what I mean.  Only spending weeks at a time with your extended kinfolk doesn’t tell you much.  Even less so if most of those visits happened when you were a kid.  Face it, when you are a kid, it is all about stirring up mischief and having fun.

Perry Florida is the destination for Road Trip 2018.  Perry is located in what my kin tell me is the mud flats and big bend of Florida.

Never heard of that region?  Me either.  But I found out it is well worth crossing 3 1/2 states to visit!  You can catch up on other reasons I’m headed this way by clicking here.

The Big Bend of Florida and the Big Bend of Texas may look similar in shape from the space station, but all that disappears on closer scrutiny.

Big Bend of  my home state of Texas is desert and mountains with the Rio Grande as an international border between US and Mexico.   Big Bend of Florida is densely forested and bordered by the mud flats of the  Gulf of Mexico.  According to Visit Florida, manatees outnumber people in some parts of this region.  Or maybe gators.

Because this area is still rural, instead of having high schools and newspapers named after the city, they are named after the county.  My people come from Taylor County, shortened to the first two letters in the words “Taylor County”.  How was I to know?  My cousin’s thought it was hilarious that I read signs as “ta-co” instead of “tay-co.”  You can never hide your Texan-ness!

The recent unpleasantries amongst the states

The dense forests of the Florida Big Bend are probably reason my father’s kin settled here after the Civil War, or what my grandmother used to call “the recent unpleasantries amongst the states.”

Many moved from Georgia and the Carolinas to chop down the giant pines that provided turpentine, lumber, paper and now cellulose.  Logging trucks are still a common site.  Every night,  I heard the mournful whistle of 3 a.m. logging train.

I love hearing from you!