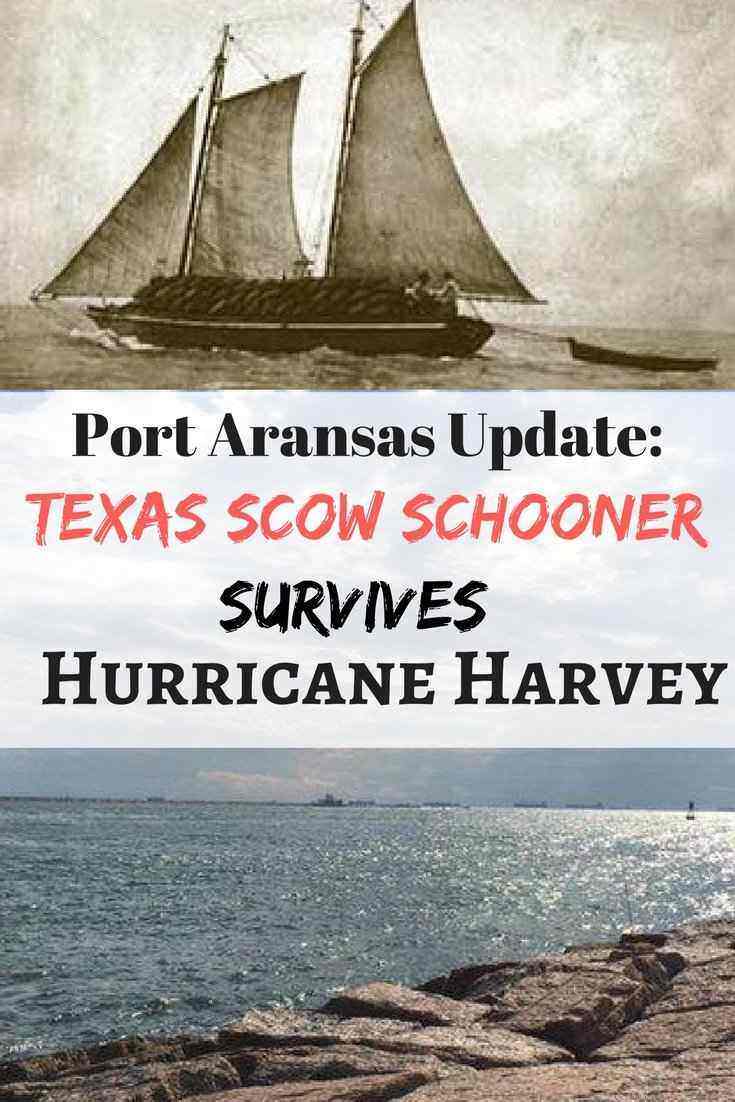 Hurricane Harvey blasted Port Aransas but unbelievably the Farley Boat works and the Texas Scow Schooner project looks untouched.  These two historic gems reach deep into the roots of Port Aransas to make you appreciate how difficult it was to build a thriving town on this spot.  I’ll give you more background on the Farley Boat Works next week.  This week, it is all about the replica Texas Scow Schooner named Lydia Ann,  which was to be completed and ready to sail by the end of the year.  With Harvey’s visit, who knows when she will hit the water.   Here is where to find the latest update on the Lydia Ann.

Boat survived but boat builder’s house not so lucky

Even though the schooner survived, I drove by the home of the man who is leading the project to bring her back to life and my stomach dropped.  The beach house where friends and I visited Dan Pecore months earlier to learn his background and the schooner’s history now looked like those long-abandoned adobe dwellings you see in Terlingua.  No roof or windows, just exterior, and interior walls.   Even more worrisome, I haven’t been able to contact Dan, but I’m hopeful a passion this strong will overcome one little hurricane.

Dan finds every inch and curve of the Texas Scow Schooner a thing of beauty – perfectly proportioned and shaped for her function.  But when I first saw it, I thought it was kind of small and squatty.  Someone had called her a “Texas Butthead” and that description fit.

These boats worked Texas coastal waters from the 1870’s to the 1920’s.  The romantic view of elegant ships like Galveston’s Elissa docked along the piers is not completely accurate, at least for much of Texas.

Scow schooners would “lighter” (take cargo from) those type ships that had much larger drafts and needed to stay in deeper Gulf waters instead of entering through the shoaled passes.  Scow schooners could also “coast,” sailing along the Gulf coast, always in sight of land and able to move far inland to places like St. Mary’s in the upper reaches of Copano Bay.

Connector vessels like these were vital to Texas commerce.  They would carry bales of cotton and timber on deck.  Animal hides and cases of tallow filled the space below decks.  Seafood was loaded into a small punt and towed behind the boat.

The Galveston and Trinity Bay Marine Museum on the upper Texas coast started the initial construction about 15 years ago.  The Scow was initially to be a school ship for Galveston Bay.  But the group ran out of money when another hurricane, Ike,  damaged the Elissa and all funds went to Elissa’s repair.

It was only possible to recreate the scow schooner there were plans from the 1940’s located at the Smithsonian.  A derelict schooner hull had been found in Galveston Bay in 1941.  Naval architect and archivist Howard Chappelle made plans from the drawings and measurements of the relic and christened the boat type a “Texas Butthead.”

In 2015 Dan hired on to lead a team to complete the construction.  When finished, Lydia Ann will be the only Texas scow schooner in existence anywhere.  Dan may be a little sensitive about that less than flattering moniker.  He assigns the name to Chappelle’s origins as a Yankee from the Northeast.  Chappelle was no doubt used to more streamlined vessels.  But, “butthead” is a pretty accurate description.

And there is a good reason she was built that way.  The scow schooner has a wide beam or width at the nominal water line and a hard chine.  While the squared off scow hulls were ugly to sailors accustomed to the sleek, rounded shapes of the time;  a scow had distinct advantages.

Dan pointed out the distinct “snub-nosed” transom shape of her bow – making her head (bow) look like her butt (stern).  But her lines were perfect for her function.  With her shallow draft and her stubby design, she had maximum volume forward which increased her buoyancy  – pretty essential in a boat!  She also had a hell of a lot of cargo carrying room.

The schooner part of her name referred to her rigging where her foremast is shorter than her main mast. Because she was gaff-rigged, her sails could be easily worked as the weather changed, a common occurrence in the Gulf.  Her unique design was as specific to Texas Gulf Coast conditions as the famous Farley boats.

Winter Texans are working on her

Dan has been laboring on the scow schooner for many months, assisted by Mike Oldani.  They have also been joined by a changing roster of Winter Texans volunteers.  These retired Yankees, who call Port A home during the colder months, are enthusiastic and knowledgeable workers.

Once finished, the boat will be transported to the Port Aransas municipal area, launched and officially christened.  She’ll go through sea trails so her rigging and sails can be tuned and the vessel balanced.

And when all that is done, the Texas scow schooner Lydia Ann will hopefully take people day sailing into the bays and the Gulf, just like the Texas Buttheads of 150 years ago.  Then Dan will stand by and watch like a proud father, seeing others appreciate her functional beauty.

Which Port Aransas favorites have you worried?

Let me know and I’ll try to find out the status.