SpaceX and last battle of the Civil War

The unluckiest Union Soldier in the Civil War saw combat on the road between Brownsville and the Gulf of Mexico.  Just a few miles separate the new launch site of SpaceX and the very last battle of the Civil War, fought at Palmito Ranch.  Here  John Jefferson Williams (1843 – May 13, 1865) became  the last Union soldier to die in a skirmish that took place 37 days after Robert E. Lee surrendered to Ulysses S. Grant at Appomattox.  Poor John.

The battlefield area is as lonely as it probably was when Pvt. Williams fought here, only four miles from a barely alive ghost town on TX SH 4.  That settlement is now named Boca Chica Village.  Boca Chica Village has gone through three names since it was founded on this far south Texas coast in 1967, just months before Hurricane Beulah paid it a visit.  Sounds like in each case, timing was not in Williams or Boca Chica Village’s favor.

Maybe timing is right for Elon Musk’s  SpaceX .  This sparsely inhabited stretch of coast is priced right and ready for some recognition.  When the SpaceX deal was announced in 2014, it felt like time  to visit  this Battlefield, Boca Chica Village and the  beach that stretched to where the Rio Grande River emptied into the Gulf of Mexico.  Our adventure starts here.

We were vacationing on South Padre Island.   We love our beach, bay  and bar time, but  felt like doing a little adventuring.  While part of the our group later paddled from South Padre Island jetty to Boca Chica Beach in less than 20 minutes, we drove almost an hour to visit the battlefield and Boca Chica State Park.  Heading across the Queen Isabella Causeway, we passed the ersatz pirate ship and the authentic Port Isabel lighthouse that was built in 1851.  While lighthouse not only changed hands a couple of times during the Civil War, it probably saw its share of real pirates.

The resurrection of the Bahia Grande

Turning left at TX SH 48, we traveled through the Bahia Grande.  This area is so dry that,  when we were  teens, a movie company scouted it as a stand in for the Moroccan desert.  It was once a bay and not just the name of one of South Padre Island’s defunct early high-rises.  However, construction of the Brownsville Ship channel and TX SH 48 to Brownsville drained off its water supply.  Now a waterway is open again and it  is starting to come back slowly.

There are lots of boat trailers and crabbers at the bridge halfway to TX SH 511.  Part of the reason for the bay’s renewal is the support of Frank Yturria of the giant Yturria Ranch.  The ranch was founded by Francisco Yturria, who played a part in the Civil War by helping thwart the Union blockade, transporting goods on ships flying the Mexican flag.

A more recent war reminder is on display to the left at the Port of Brownsville.  That’s where the U.S. Navy has contracted a local scrap metal company to dismantle the U.S.S. Forrestal, the nation’s first super-carrier that fought in the Vietnam War. Senator John McCain served aboard the U.S.S. Forrestal which launched in 1954 and was active for nearly 40 years.

After exiting TX SH 48 and turning left at onto FM 511, we traveled east a few miles to the intersection of TX SH 4 and turned left again.  Important  advice! Learn from our first mistake and get water, snacks, beer, gas, and other survival supplies at one of the c-stores at this intersection.   While there are houses, cows, salt flats, a battlefield, shells, and sand for the next 15 or 16 miles until you run out of pavement, there is no Budweiser or bathrooms so plan accordingly.

The Battlefield is hard to find

While poor Private John Jefferson Williams (Company B – 34th Regiment Indiana Infantry) earned his footnote in Civil War history at the Battle of Palmito Hill, you have to keep your eyes open (and looking to the right) to find the battlefield markers.  Because this area is relatively isolated, it’s virtually unchanged from 149 years ago.

From the little we knew about the battle before this visit, we were under the mistaken assumption that word of surrender of Lee had not gotten this far south.  Not so.  The Texas branch of the Confederacy was part of the Trans- Mississippi Department (Texas, Louisiana, Arkansas, and the Indian Territory), which had not surrendered as of May 12, 1865, when Palmito Ranch occurred.  Several prominent Texans encouraged rebel soldiers to fight on despite Lee’s surrender and the virtual dissolution of the Confederacy.


Economic reason for the battle

The economic importance of the South Texas coast to the Confederacy accounted for the lingering concentration of  troops from both sides  in the region. Through Brownsville and the Rio Grande, the Confederacy secretly exported its cotton to Mexico.  (Remember Francisco Yturria?) The profits financed the Confederate government.  Palmito Ranch’s location midway between Confederate-held Fort Brown and Union-occupied Brazos Santiago explains why the area had already seen combat.  In May 1865 it again became the scene of intense fighting.  While the Union instigated the conflict, they lost the battle and suffered 111 casualties, among them the unfortunate John Jefferson Williams. 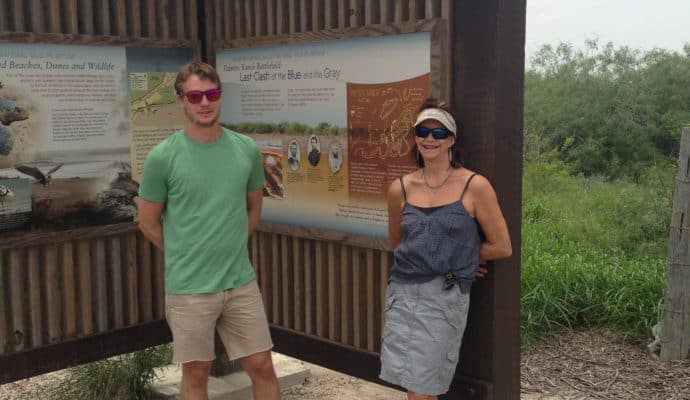 Little commercial development is on this stretch of road. That’s why SpaceX and last battle of the Civil War are going to be neighbors.  Right now, the terrain would still look familiar to Pvt. Williams, his comrades and opponents.  It’s  a different experience from visiting the bigger battlefields with visitor’s centers and tours.  I imagine Palmito may give a truer reflection of this war – remote,  almost forgotten pieces of frontier, with unknown value until all the shooting  and politicking was over.

Maybe John Williams and the battlefield will get more attention once SpaceX gets here.  But do yourself a favor and visit now, while it is still possible to put yourself in all the soldier’s minds.

Here’s an irony.  While the south won the first battle of the war (First Bull Run/First Manassas in 1861) and this last battle, it still lost the war.